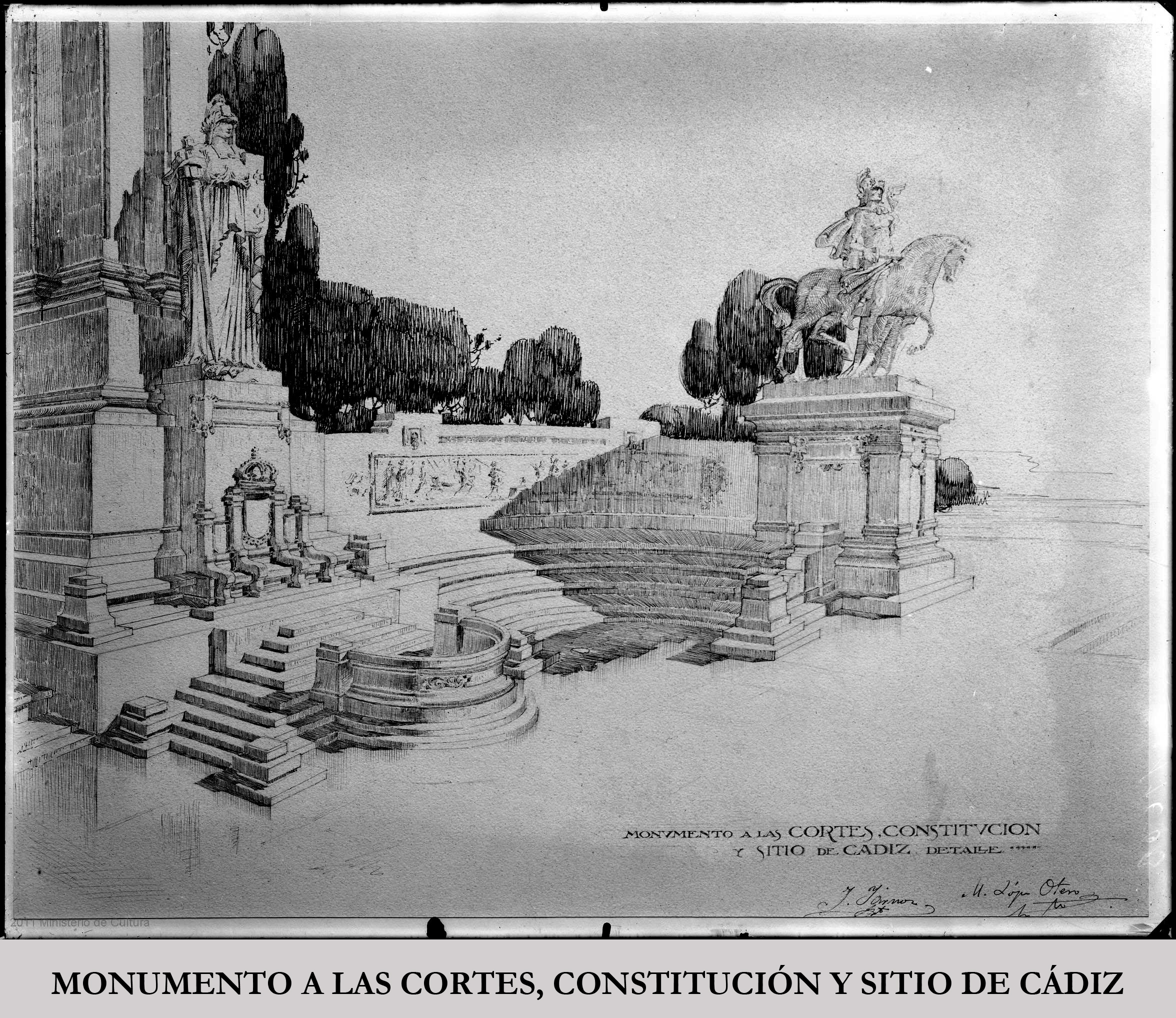 The collection is made up of 113 works that include the Spanish Carta Magna, draft and proposed constitutions, parliamentary initiatives, books on History and Constitutional and Military Law, essays, speeches and conferences, advertisements, news, photographs, etc. The bulk of the collection (93 works) comes from the Real Academia de Jurisprudencia y Legislación, but there are also works from the universities of La Laguna (12) and Navarra (10), the Fundación Sancho el Sabio (1) and the Fundación para la Etnografía y el Desarrollo de la Artesanía Canaria (1)

Among the most curious works in this collection are a general pardon, in the form of a Royal Decree, on the occasion of the re-establishment of the Spanish Constitution in 1820 oath of obedience to the Constitution of 1812 by the Bishop of Orense and a Poem to the constitution of 1812.

In the last two centuries of Spanish history, from 1812 to 1978, eight different constitutions have been enacted and entered into force, which have marked the political and social development of our nation.

The Constitution of Cadiz was proclaimed on 19 March 1812 and introduced, for the first time, the concept of national sovereignty. There was some political agreement between liberals and absolutists and this allowed the foundations of a liberal state to be laid in Spain. It was developed as a further resource for national independence in the face of the French invasion and proved to be an instrument that succeeded in overcoming the foundations of the Ancien Régime. 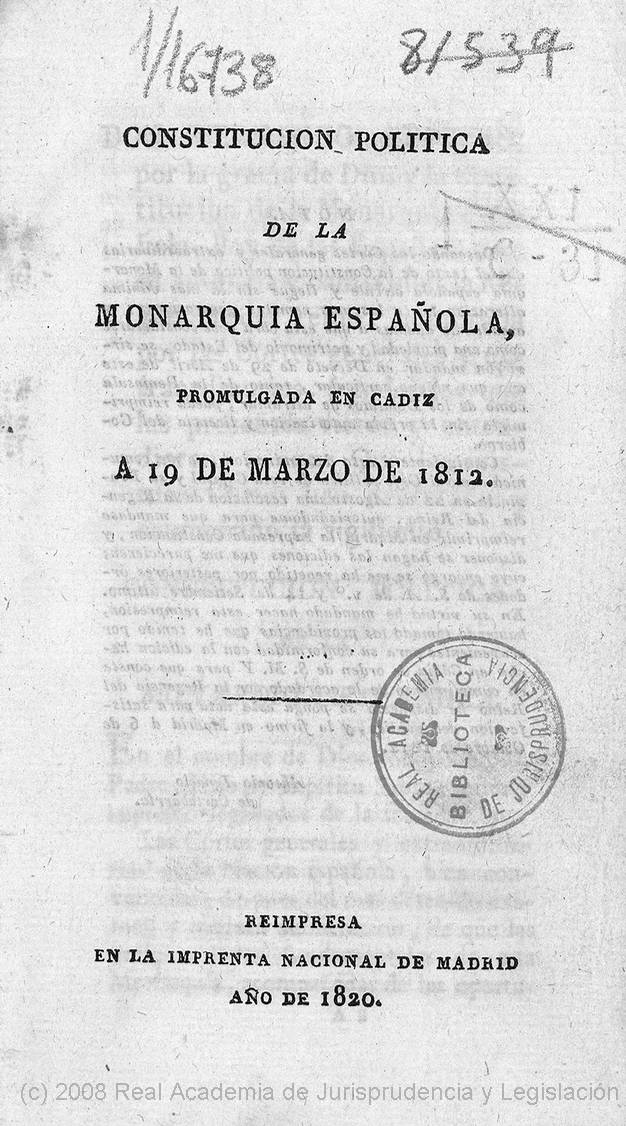 The Royal Statute of 1834 can be considered a Charter granted and was a response to the liberal and progressive Constitution of 1812. It developed the programme of the moderate party without taking into account advanced liberal concepts. The king held the legal initiative and, in contrast, the Cortes had little importance and activity. It is doubtful whether the Royal Statute was a genuine constitution or merely a convocation of the Cortes. 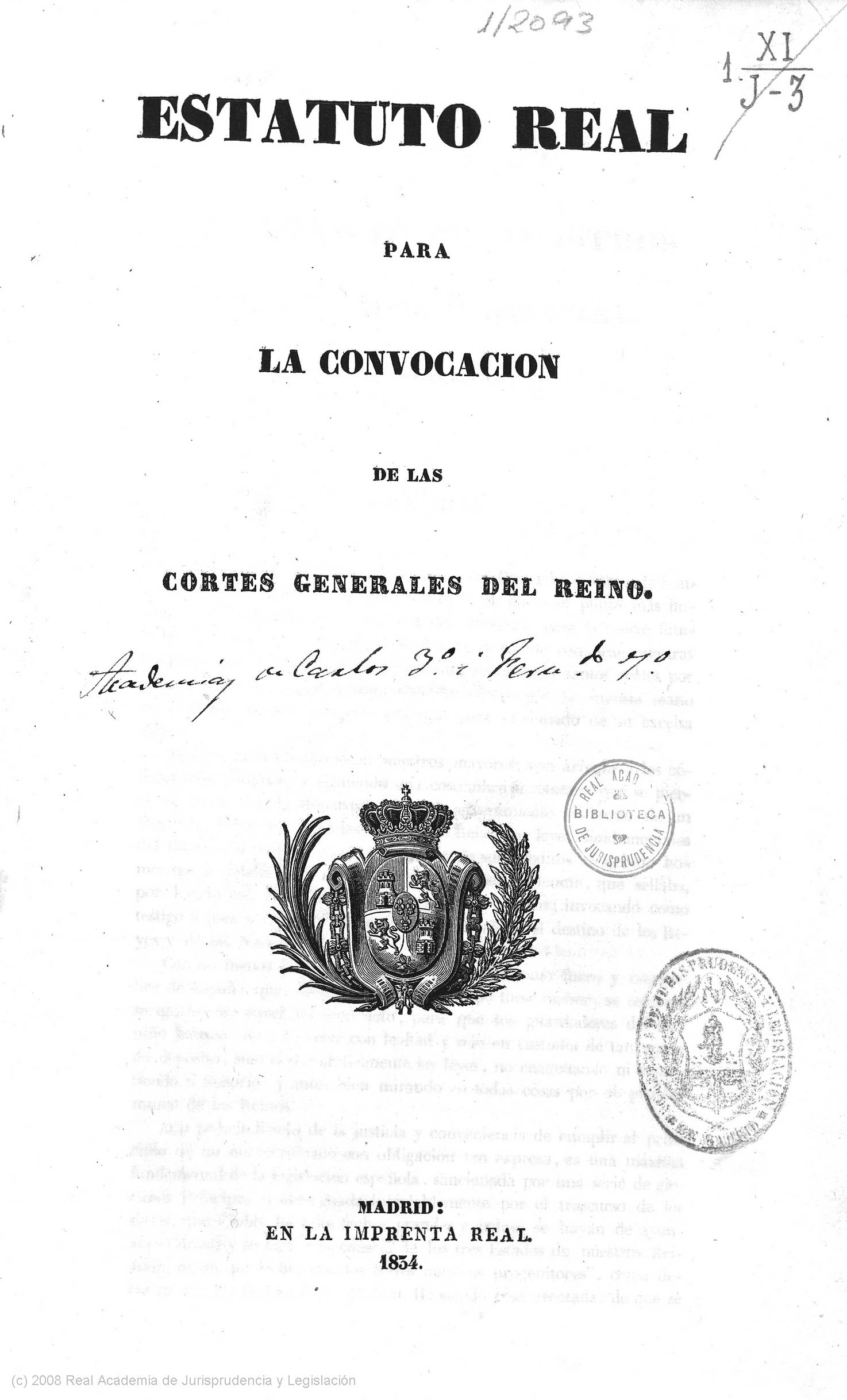 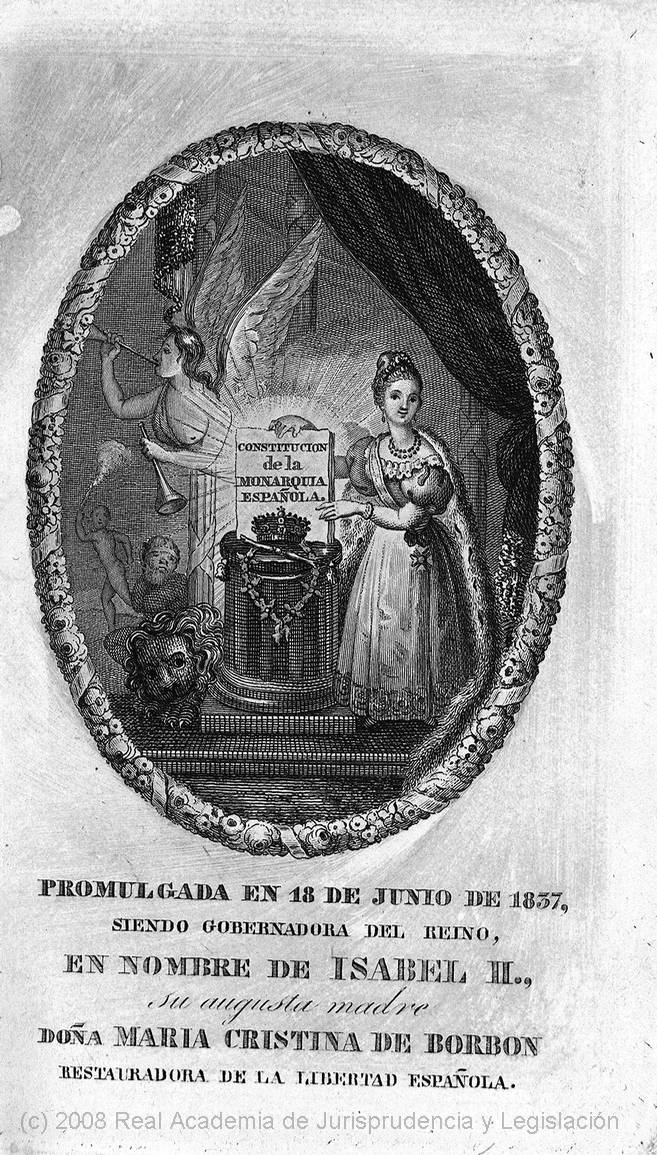 The Constitution of 1845 turned out to be an effort by the moderates to reconcile tradition and revolution. Moderate liberalism succeeded in imposing its doctrinal conception. The revolutionary concept of the sovereignty of the nation disappeared and reverted to the traditional historical formula of sovereignty shared by the Cortes and the King. In this way, the dominion of the Crown over the other institutions was articulated. 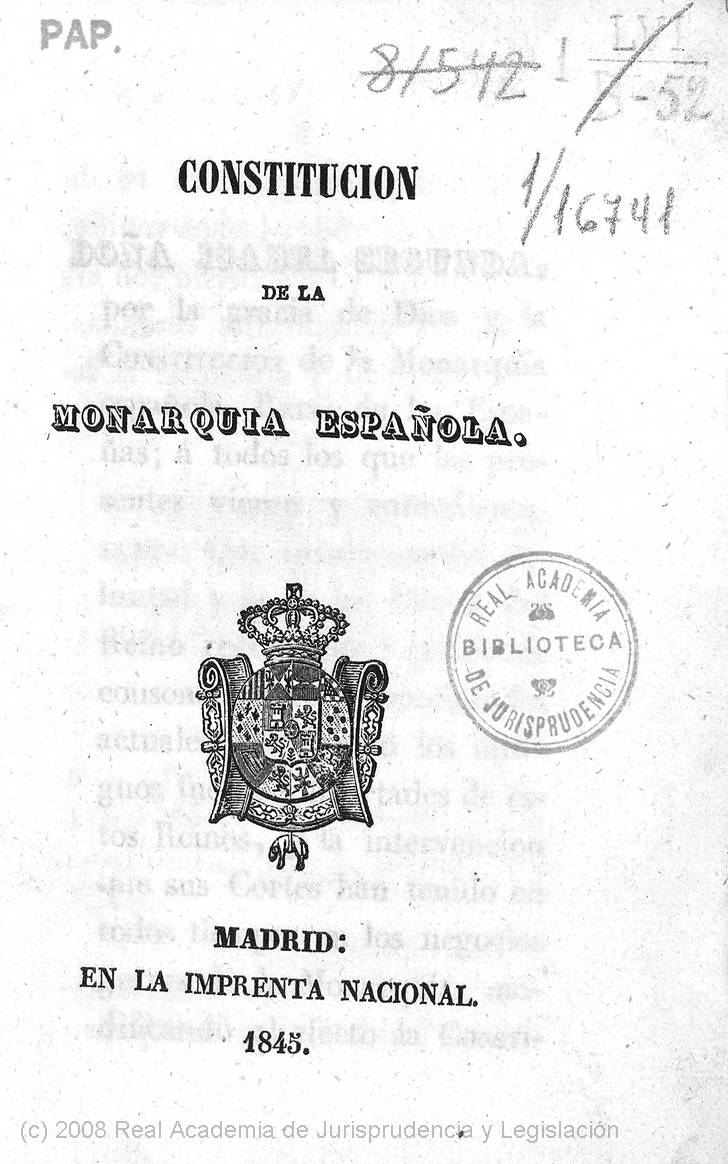 The Constitution of 1869 was basically the result of the democratic principles of the Revolution of 1868. It was the first to be drawn up by an assembly elected by universal male suffrage. The main points, considered the essence of the 1868 Revolution, were embodied in the constitutional text: national sovereignty, universal suffrage, non-denominationalism, separation of powers and, above all, a broad declaration of rights. It represented an important step forward in Spanish constitutionalism. 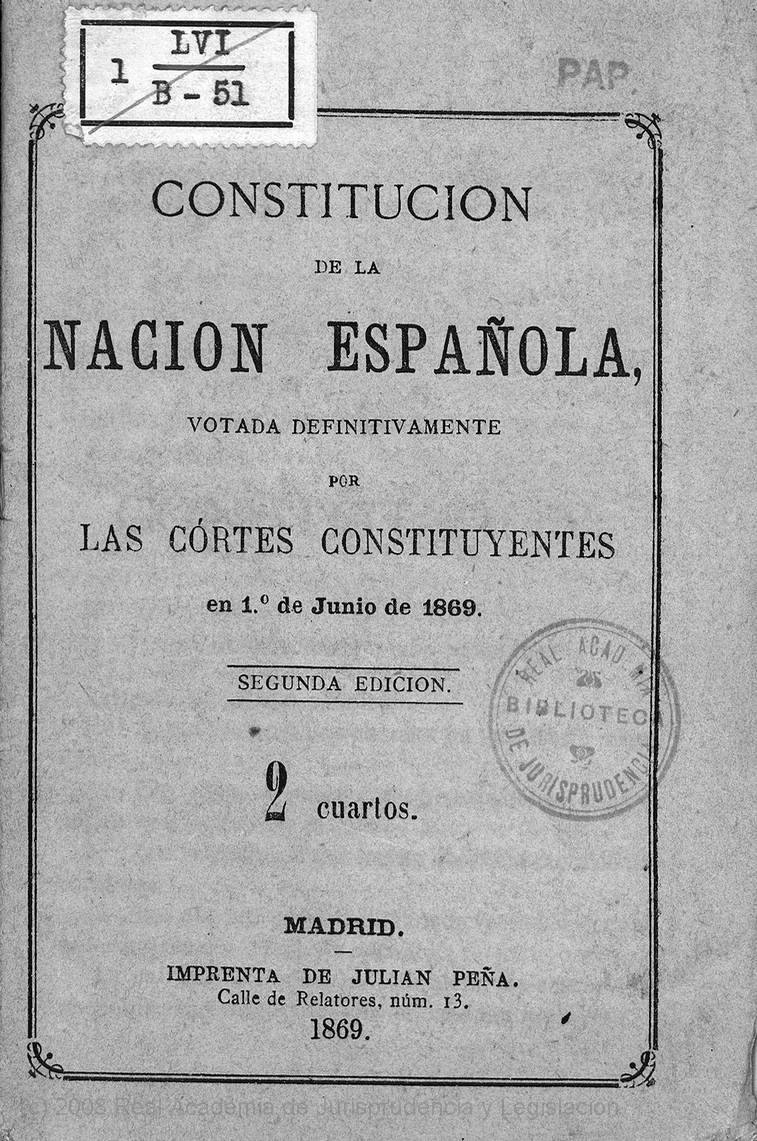 The Constitution of 1876 was the result of an agreement between the various currents of moderate and conservative liberalism, dominant during the Restoration, to alternate in power. The king recovered broad powers and once again shared sovereignty with the Cortes. The legislative capacity of Congress was severely restricted by the action of an aristocratic and elitist Senate. 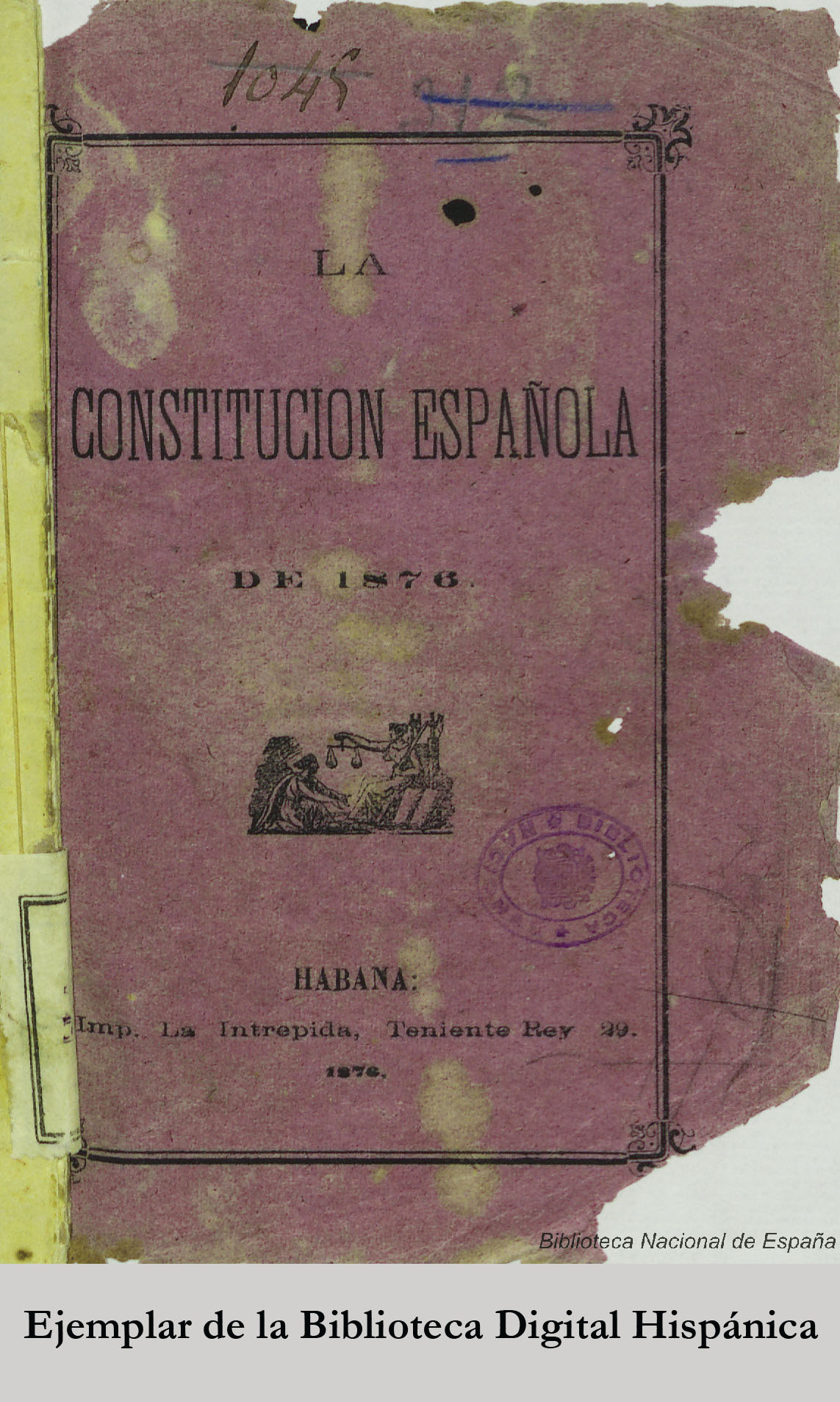 REPUBLICAN, POPULAR AND DEMOCRATIC CONSTITUTION OF 1931

The 1931 Constitution revived part of the republican project of 1873. It established an advanced and democratic state based on the rule of law. Spain took the form of a "democratic Republic of workers of all kinds", secular and non-denominational. The political principles underlying the 1931 Constitution were democracy, decentralisation, secularism and social economy. The Constitution established a single legislative chamber and a Court of Constitutional Guarantees and provided for the autonomy of the municipalities and regions. 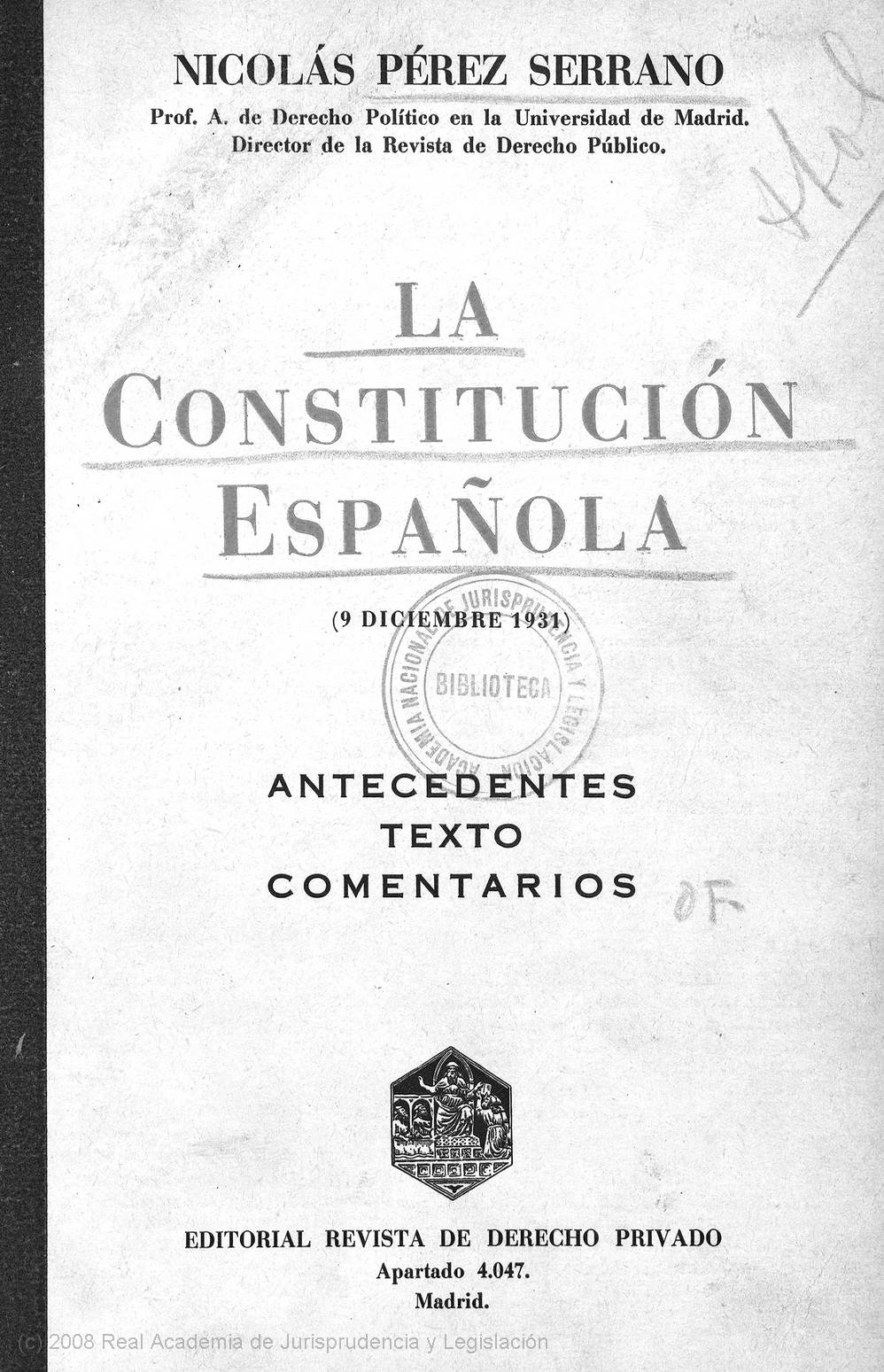 CONSTITUTION OF 1978, CONSENSUS AND THE STATE OF AUTONOMY

The 1978 Constitution was the product of the political consensus that made possible the transition to democracy in Spain after Franco's death. It proclaimed, as an original principle, the sovereignty of the Spanish people, constituted as a social and democratic state governed by the rule of law. It enshrined the parliamentary monarchy as the political regime of the Spanish State and defined it as "social and democratic under the rule of law". The text marked a break with the previous regime, establishing a highly decentralised system in Spain with broad autonomy for the territorial Communities, although within "the indissoluble unity of the Spanish Nation". 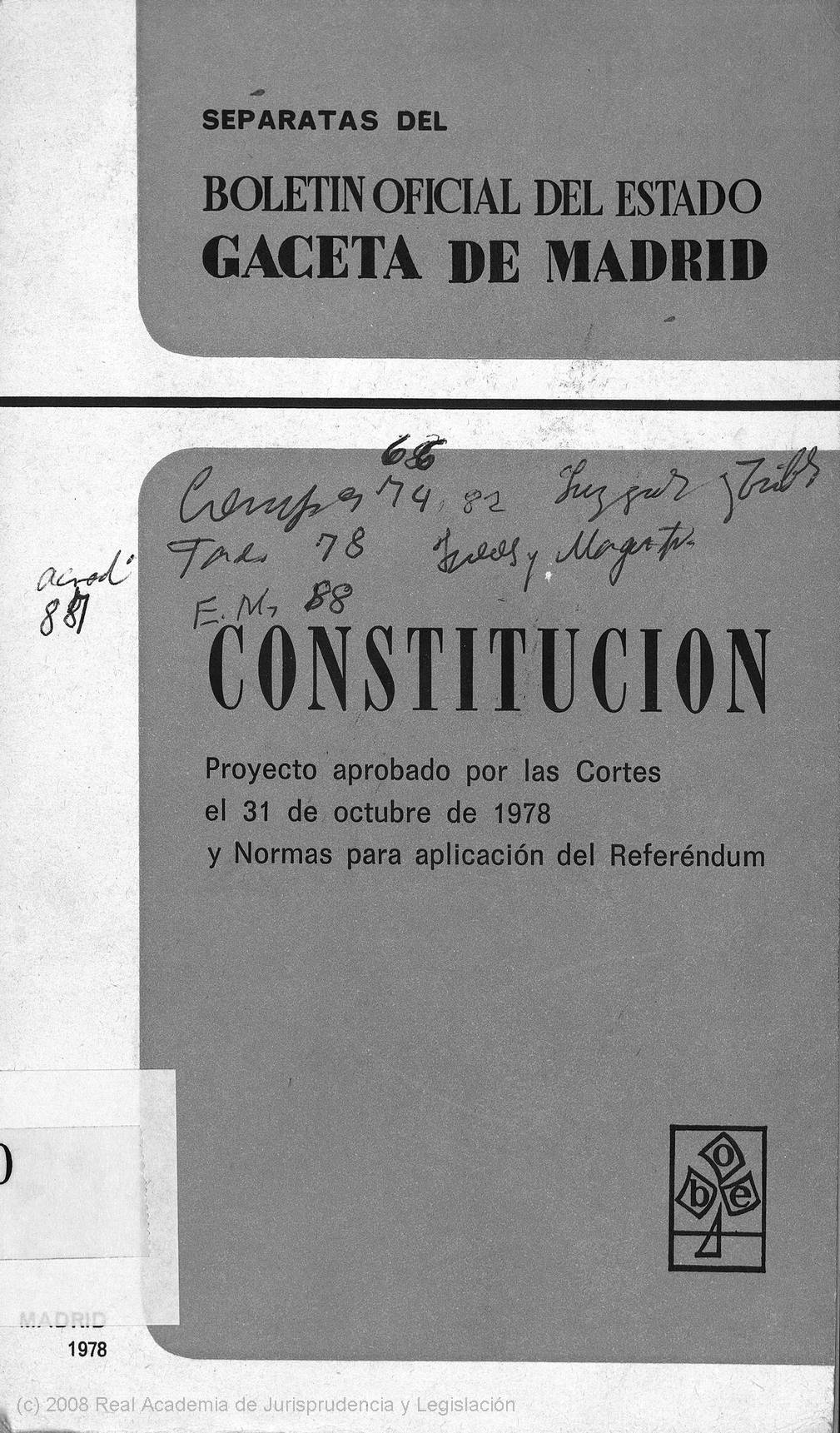 Royal Academy of Jurisprudence and Legislation